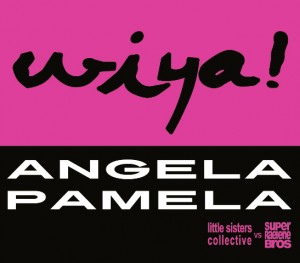 launched in the capital of black australia, the song is both a cry for help in the campaign to protect indigenous communities threatened by the proposed Angela Pamela Uranium mine, and a celebration of the power of indigenous voices to stand and defend the wellbeing of their people. the song is sung in luritja and western arrarnta with a smattering of english, across a deep funk groove.

This is what music is for, sending out a message. Brothers and sisters from the Alice we hear you. WIYA! Don't dig it.dae

Love the Super Raleene Bros and crazy about this track. Have had it on high rotation.This part of the world deserves some real attention.play this to everyone you know and spread the word. What's happening with Angela Pamela is unforgivable. There is no worthwhile reason that this mine has to happen here. It's rubbish don't dig it.Lady m

Against the backdrop of an infectious roots based groove, the sounds of arrarnta and luritja ring out. And with a real message too. Wow! This is authenctic roots music. Love it - dig itpepelouise

Wow! This song just blew me away. It had me grooving at the computer terminal. Hypnotic rhythms, powerful voices, important theme. Sucks you into the heart of the country with its -- again hypnotic -- voice. Amazing fusion of contemporary 21st century sound with timeless culture.jmag

It's about time that mainstream music embraces its political potential and recognises the creative and opinionated first peoples of Australia! I'm excited by the collaboration between Western Arrarnta and Luritja singers and Super-Raelene bros. well done all on creating a strong message (No Uranium mine near Alice Springs!) with a strong funky groove. it sticks in my mind for days. I hope the essence of no-nuclear and respect to Aboriginal land sticks in your head too.wiya angelapamela

a uranium mine 20km from the main town in the heart of australia? think about it people. this is the first cross-cultural song made in central oz in some time - its a good mix of contemporary Indigenous and electronica - although a bit more bass & variety would make it great.pseudonymph

been listening this for the last half hour, tapping my foot continuously! Love it!PaulPosi

i dig the music it aint no rubbish, but that uranium i say 'wiya wanti' dont dig it! keep our alice springs water beautiful and full of loving vibes....a great funky tune that sends a clear groovy message to cameco/paladin that the majority of the community say, 'wiya angela/pamela'....super bros an sis...trucejuice

I spend a lot of my time at work driving in the car, and everyday I surf the radio channels looking for this song, because I love it so much. The rhythm, the combination of languages sending out one message, the actual message. It's just c l e v e r !!HollyAnna

Love this track. Such a playful way to voice such a serious message. AWESOME!Rocklishus

love it! no uranium mining – the struggle goes on. the language in the song is beautiful. love everything about it.Linda Beth

wiya angela pamela will inspire us all to get up and dance and fight! against angela pamela uranium mine! stop the poison! start the music!!Richilde

fantastic dance number, love it! A true inter-cultural collaboration sending out a strong message to leave uranium alone. pass this catchy song onto all your networks. help spread the word ‘wiya, itja, lowa uranium nothing, its rubbish, don’t dig it.’Kenwick

the best, cross cultural, dynamic, political flavour of music I have heard in ages. no angela pamela!RbellaB